10 Best Indian hind web series that you must watch it.

Stranger Things, The crown, sacred games, and many more have changed our perspective towards web series. In 2018, we have seen a boom in web series produced in India. web series is seen replacing the Television nowadays. 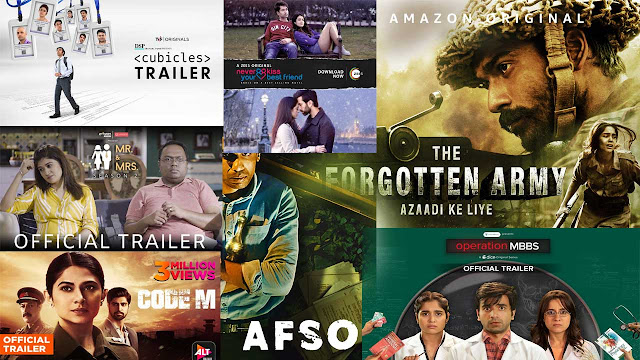 In the days of the internet and mobile, web series are becoming the heart of the young generation.
Big  Companies like Netflix, Amazon, and zee, Mx player have started to invest heavily in regional content web series have gained popularity because they are taking us where television won’t.
people especially the young generation is completely bored with the daily melodrama of saas-bahu serials .so the television series are seen instantly replaced By the internet web series Which are gaining popularity in India.
Close to 70%of the Indian population is young and Indian web series is the new trend among them .web series are heavy on content rather than melodrama, they have also made it a part to quench our thirst for diverse subjects and issues.

Indian Web series are pushing our boundaries of imagination and leaving the burden of virtues behind. We can feel the story and relate it to our problems. instead of waiting for their episode daily on a fixed time, the viewers can watch a web series whenever they have free time.
The content of the series is more appealing to youngsters. The series can be released on youtube for free.everyone gets a chance to explore their talent through the web platform.
Viral fever,tbb are some of the examples of it. They earned all their fame for their web series.
Another important reason why we resent TV is the bazzage of advertisements which spoils our mood and viewing experience.
The skip button along with the shorter mterruption during program viewing sits well with the viewers who value every second they spend in front of the screen.
In this the article , we will talk about some of the 10 best Indian hindi web series available in 2020.

First impression operation MBBS is the story of three first-year MBBS students. Nishant, Sakshi, and Huma. They come from diverse backgrounds and have their own reasons for pursuing MBBS.
The First episode title as ‘infection ‘ introduces  into the three characters and describe  their early days in college.
The second episode ‘Diagnosis’ digs deeper into their life which is now burdened with academic pressure of personally find it one of the best web series for teenagers.
The Dice media web series is far better than other Indian medical TV shows and web series.
star cast: Ayush Mehra, Anshul Chauhan, Sarah Hashmi
Rating: 8.5/10

Afsos is an Indian web series .its  a great work of black comedy web series by anubhuti  Kashyap. The series follows a depressed man  who  wants to commit suicide but is unable to die .it premiered on Amazon  prime on  6 February 2020.
It is a story of Nakul who is a struggling writer based in Mumbai having a hard time coping with unemployment, lovelessness, and personal guilt.
This leads him on a suicidal path as he tries creative ways of ending his life. ever on one occasion he lies down in front of an incoming train ,but is saved by a senile beggar who ends up dead instead.
The story is all about the side of unemployment, how  we  deal  with  our problems and about our approach towards our problem.

A married woman is a web series made by Ekta kapoor ‘s OTT platform ALT Balaji Radhi Dogra and Monica Dogra is playing the lead roles in this web series.
The story of a homosexual woman got lots of love from the audience. the story is based on a popular book author Mayu Kapoor’s book ‘ A  married woman ‘ .
The story revolves around the middle – class woman Aastha who living in Delhi. she has children and a loving husband even after this she gets into an unconventional relationship with a younger woman.
The story is set against the backdrop of Babri Masjid demolition.

Indian web television is all about its crime drama and jamtara is one of the best crime drama web television  series  directed by soumendra Padhi  and written by Trishant  sri  vestava.
The story revolves around the phishing operations in the jamtara district of Jharkhand .it was released on Netflix on 10 january.
Mr pasha ,in 2015 read an article about the phishing operations in the jamatare district about school kids duping people and got looked with it . he sent his writing team to do the research.
The character of female sp Dolly Sahu was based on jamtare’s superintendant Jaya.

The web series is strong around the profound effect of PUBG on the society. the web series has been shot in Hindi and portrays the stories of PUBG MOBILE players from different walks of life.
Each episode is New and fresh story .it tells tales of determination and grit overcoming personal.
Challenges ,tales of friendship fostered by the game, and much more.
The story takes place in a boys hostel .the plot is based around the friendship that players establish on the battlefield.

This is a web  television series  which premiered on Amazon Prime on 24 january 2020.
It is a wonderful creation of Kabir Khan, the series is based and women in the Indian National Army led by  Subhash  Chandra Bose. the series stars Sunny Kaushal and sharvari.
The forgotten The army is based on the true story of Indian soldiers who marched towards the capital, with the war, cry ‘challo pilli’ to free their country from the reign of the British.
The Indian National Army which was forced out of British defeat in Singapore during world war , was led by the charismatic Netaji subhash Chandra  Bose and had the first women’s infantry regiment since the  Russia units of 1971-1918 .
While these soldiers fought against all odds and against the British army to free india,their struggle and story somehow got lost and they become ‘the forgotten army’.

Following the success of its first season,India’s leading women-centric entertainment channel Girlyapa from the house of the viral fever launches Mr and Mrs season 2 in association with India’s most admired  home interiors brand livespace.
Mr and Mrs captures the ethos of the marital life of a young couple through relatable and captivating moments depicted throughout the series in a very funny way.
Written by its lead actors Biswapati sarkar who plays Sanju and Nidhi Bisht as Madhu , also one of its lead characters.
The web series is a  showcase of the standard one-dimensional soap and portrays the real challenges faced by a young married couple in modern India.

Code M is a web series produced by ALT Balaji .this web series was launched on 15 January 2020. Actors like Jennifer Winget, Rajat Kapoor gave their best in it under the direction of Akshay choubey.
The story of this web series revolves around Indian army lawyer Monica Mehra, in which she is sent to investigate militant encounters. Amry officer  Sameer Ali was killed in this encounter while investigating.
Monica found that this story is not limited to the encounter but its connection is connected to the entire Indian Army.
Then, the story takes a turn when she knows that the encounter was fake and Sameer’s death was a planned murder.
Who killed sameer Ali and Why ? this will be shown in this.

Never kiss your best friend is an Indian web seriesproduce by Zee5 and hit the screen on 20 Jan 2020. This web series is an example of the direction of Arif Khan.
The story is based on one of the best –selling novels,Neverkiss your best friend, by sumrit Shahi.
The story of this series revolves around two friends sumer and Tanie. Both friends are worried about feeling towards each other .this complication ends at a separation.
We will see how after separation, these two are able to stay away from each other or come closer and how will they finally share each other’s feeling ..

Cubicles is a web series produced by TVF Play in collaboration with DSP mutual fund. this web series launched on 10 DEC 2019 .it can be seen on TVF Play and youtube.
The story of the cubicle revolves around piyush., who enters the IT sector and gradually his life starts changing .the story shows the important moments of the life of IT sectors.
Employee like his very first salary’ working over weekends, failures and success will be feature in this web series.  these are some of the things that every IT engineer will have to face, which has been beautifully shown though this web series.

A comedy-drama, which captures the journey of an engineering graduate Abhishek, who for lack of a better job option joins as secretary of a Panchayat office in a remote village of Uttar Pradesh.
Star cast : Jitendra Kumar, Raghuvir Yadav, Chandan Roy
Rating:8.9/10

Thanks for visiting lyricstones. I hope you can enjoy the article for  more article keep visiting.
I think web series in india touch real-life issues but Television wouldn’t daze to touch some issues like homosexual love stories, virginity, crime drama, black comedy. Most of these issues works because the viewers are able to relate with the issues they face or they raise.