10+ Best Indian web series that you must watch

Indian web series: Hello Friends Welcome to our new article. Today, we are talking to Top 10 Indian web series.
As we know after introducing jio the rate of Data is very cheap. The user of the internet is also increasing very fast .so Due to the cheap rate of Data consumption of video content also has increased. 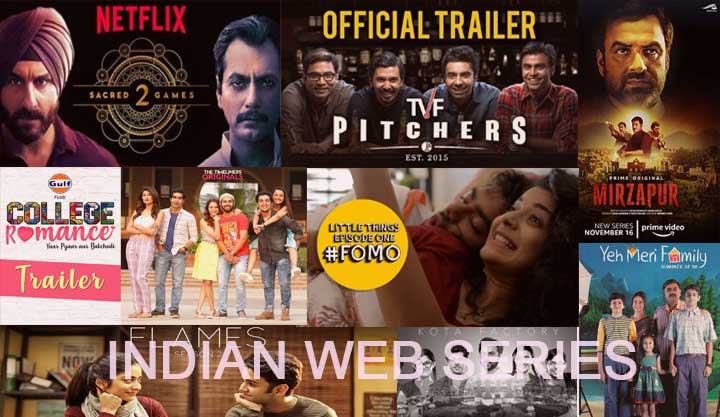 So we are coming to the main topic. today, I will give you lists of top 10 Indian web series .it is the most-watched we series .i also recommend you to just watch these.

12) KOTA FACTORY:-is an Indian Hindi language web series .it is based on the student life of a 16-year old boy named Vaibhav.

As we know that koto is famous for its coaching center where many students come from different parts of the contrary for there entrance exams preparations.
Vaibhav is also one of them who moved to koto from itarsi for there preparations.in this web series, the whole koto life of Vaibhav is shown.
It is released on TVF Play and youtube on 16 April 2019.it is India’s first black and white web series.
Star-cast:Mayur More,Ranjan Raj,Alam Khan,Jitendra Kumar,Ahsaas Channa,Revathi Pillai,Urvi Singh
Rating:9.1/10
Watch on youtube

11)DELHI CRIME: is based on the Nirbhya Case. It is written and directed by Richie Mehta. The story of the whole web series revolves around the investigation Where DCP Shefali sha (vartika Chaturvedi) has given a task to investigate this case and consider who involved in this case.

Watch on Natflix
8)Laakhon Mein Ek:-Laakhon Mein Ek:  is an Indian drama web series. In this a Doctor named Shreya .she is posted in Sitapur village.
To conduct a cataract camp.
But she starts facing challenges unfolding one after the other.
She keeps fighting against the system.
She wants to change the corrupted system   but the question remains whether she will change the system or the system will change her?
It released in 2017 you can easily enjoy on amazon prime
Creator: Biswa Kalyan Rath
Starcast: Biswa Kalyan Rath, Akshaya Bhingare, Abhishek Chaudhary
Rating:- 8.3/10

7)Yeh Meri Family:-Yeh Meri Family is an Indian comedy-drama web series .it is written by Saurabh Khanna and directed by Sameer Saxena.it is a story of 12-year-old Harshu Gupta.in this series you can feel the of 90s days .if you are 90s child than definitely, you have gone in the 90s childhood after watching this series.
It is released on TVF plays on July 12, 2018
Creator: Sameer Saxena
Stars cast: Vishesh Bansal, Mona Singh, Akarsh Khurana
Rating:-9.2/10

·      The Family Man is an edgy action-drama series.
·    which tells the story of a middle-class man who works for a special cell of the National Investigation Agency.
·    While he tries to protect the nation from terrorists
·       He also has to protect his family from the impact of his secretive, high-pressure, and low paying job.
Starcast: Manoj Bajpayee,Priyamani,Sharib Hashmi,Neeraj Madhav,Pawan Chopra,Kishore Kumar,Gul Panag,Shreya Dhanwanthary,Sundeep Kishan, Shahab Ali,Mehek Thakur,Vedant Sinha
Rating:-8.6/10
Watch on Amazon prime

A teenage romance from The Timeliners that aims straight from the heart. This web-series is the story of  a young romance unfolding as a chemical reaction. It looks like a never-ending struggle in Rajat and Ishita’s life. Ishita’s life is in turmoil. Her Dadi passed away. Rajat’s parents find out that he has been bunking his tuition classes.
Starcast:- Ritvik Sahore, Tanya Maniktala, Sunakshi Grover
Rating:-9.3/10

Divorced, jobless, hopeless. Three siblings plan a road trip together. Chandan, Chanchal & Chitvan. Together they start a hilarious journey, to find themselves and their relations. So Chandan is divorced, Chitvan is broke and apparently, Chanchal is faking her pregnancy. Chandan, Chanchal, and Chitvan embark on a journey and meet some vagabonds as they get stuck in a desert.
Number of seasons: 2
Number of episodes: 10
Starcast:- Sumeet Vyas, Maanvi Gagroo, Amol Parashar
Rating:-8.6/10

A story of trials and tribulations of four young entrepreneurs who quit their day jobs in order to pursue their start-up venture. Showcased the life of a young IT employee and his friends, in the pursuit of their dream i.e., Bringing their idea into the market.
Starcast:- Naveen Kasturia, Arunabh Kumar, Jitendra Kumar
Rating:-9.2/10

A shocking incident at a wedding procession ignites a series of events entangling the lives of two families in the lawless city of Mirzapur.
Three generations of Tripathi’s show the world who they are. Guddu and Bablu have come into their own in their private and professional lives as gangsters.
Akhandan and Tripathi made millions of exporting carpets and became the mafia boss of Mirzapur. His son Munna, an unworthy, power-hungry heir stops at nothing to continue his father’s legacy.
Starcast:- Ali Fazal, Pankaj Tripathi, Vikrant Massey
Rating:-8.5/10

I hope you enjoy the article and get the information that you want to come here.
Hey friends today I am giving top 10 indian web series list . For more article you can keep visiting our site.
Related article:-